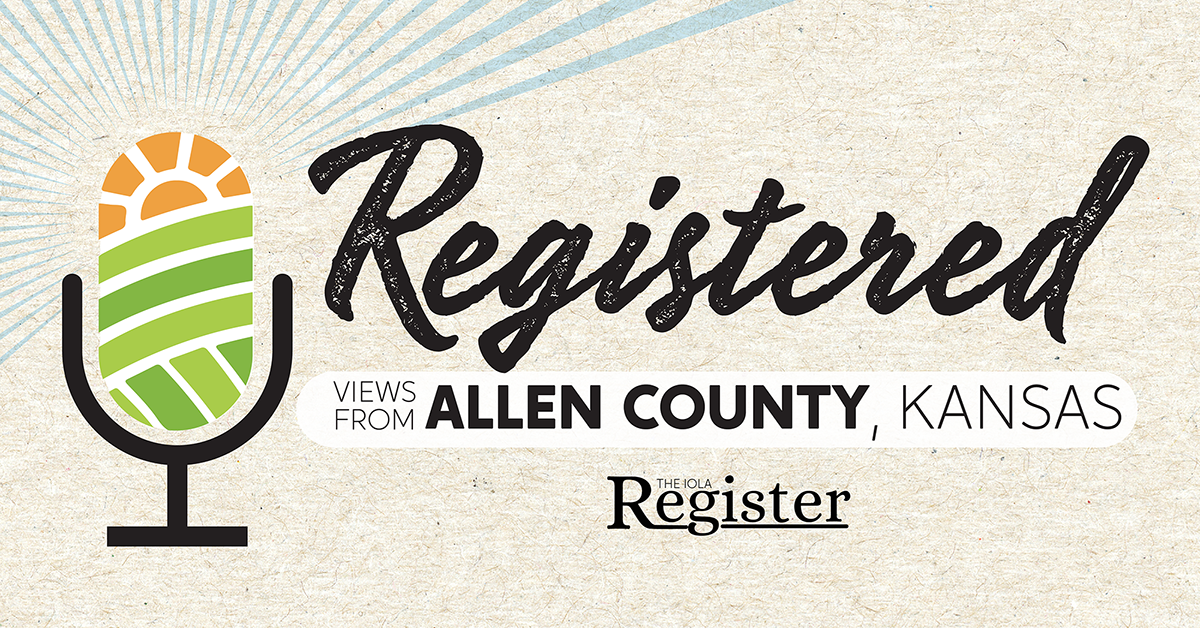 Registered explores the people and places that make Allen County, Kansas a special place to live. The views from Allen County, produced by The Iola Register.

After a long break, we’re back with a special episode. Today, Register reporter Vickie Moss interviews Dr. Brian Wolfe of Community Health Center of Southeast Kansas and a longtime physician in Iola about the troubling surge in COVID-19 cases. Active cases, hospitalizations and deaths have skyrocketed over the past several weeks, as the delta variant wreaks havoc on a country already weary of masks, Zoom meetings, and quarantines. Now, however, as vaccination rates remain stubbornly low and well below herd immunity, it seems we may be done with the coronavirus, but it is certainly not done with us.

Sharla Miller: "Not one more"

Sharla Miller lost her son Matthew to suicide last June. He was 19 years old. Since then, Sharla has become an activist in our community, spreading the word about how important and difficult the battle against depression is and advocating for mental health awareness. Last year, She was a driving force behind the first-ever 13 Reasons to Fly SEK, a suicide prevention event educating youth and communities at large. And this year, she took the lead again, organizing the event virtually. In today’s podcast, Register reporter Trevor Hoag and Tim Stauffer talk with Sharla about the road she’s traveled so far, her hopes for our community and the passion she has for not losing one more life to suicide.

In today’s episode, Tim Stauffer speaks with Josh Granere, Peerless Product’s incoming plant manager for their new Iola facility, about what it means for him as an Allen County native, to be a part of bringing Peerless to little old Iola, Kansas.

With the election just a few days away, our country will soon finally be able to put a long and nasty campaign season behind us. But what next? How do we get back to normal again, after spending what seems like forever at each other’s throats? In today’s episode, I speak with Ed O’Malley, CEO of the Kansas Leadership Center, about what steps community leaders can take to bring people together again and how we can, in his words, mend our civic fabric.

Bob Johnson began working at The Iola Register on July 6, 1964. 56 years later, almost to the day, he penned his last “Weeks End” column in the July 11, 2020 edition of the Register. In this week’s podcast, Richard and Tim talk with Bob about what he’s seen and learned over a lifetime of journalism. Remarkably enough, Bob encountered only three editors— Angelo Scott, Emerson Lynn and Susan Lynn. But in terms of content, well, Bob’s articles number in the tens of thousands, covering everything from football to city council meetings to slugs. Yes, slugs.

In today’s episode, we headed out to LaHarpe’s City Hall to speak with David Lee. Lee is running for a seat on the Allen County Commission. He faces Craig Mentzer and Eugene Weatherbie in the August 4 Republican primary. Lee believes Allen County has the tools for robust economic development, and much of our conversation focused on his ideas on how to ensure the county prospers—and how his experiences make him, as he says, uniquely qualified for the job.

John Brocker has been a businessman and realtor in Iola for 45 years. He served as president of the Kansas Association of Realtors in 2012. This year, he’s running for a seat on the Allen County commission, the same seat he briefly held until losing to Bruce Symes, the District 3 incumbent, in 2018. In today’s episode, the fifth in our series covering local candidates, we speak with Brocker about what’s motivating him to run again, his priorities if he wins the Aug 4 Republican primary against Symes, and how his business background would guide his decisions as commissioner.

In today’s episode, we spoke with Armando Hernandez of Chanute. He’s challenging Rep. Kent Thompson of LaHarpe for his seat in the Kansas House’s 9th District, which includes Iola, Humboldt and Chanute. The Republican primary is August 4, but you can cast your ballot now—advanced voting has already begun. A retired chiropractor and currently employed as a computer service technician, Hernandez has a strong interest in economic development, healthcare and bipartisanship. In his words, Republicans and Democrats “can work together. We always have.”

Bruce Symes: We need steady hands on the tiller

In today’s episode, as we continue speaking with local candidates facing primary challenges in the upcoming Aug. 4 election, we talked with Bruce Symes. He’s seeking a second term as Allen County Commissioner, representing District 3. A former Register reporter, he now teaches at Allen Community College. We reached him by phone, as he was in Wichita accompanying his father undergo a heart procedure.

For today’s episode, Richard and I headed out to Craig and Denise Mentzer’s home in rural Allen County, southeast of Neosho Falls. Craig is running for a seat on the Allen County Commission and faces Eugene Weatherbie and David Lee in the August 4 Republican primary. As we spoke in their sunroom, a multi-million dollar rain, as Craig called it, gentle fell and tapered off as our conversation advanced. We spoke on a wide variety of topics, from his interest in affordable rural internet access, infrastructure and farming.

The easiest vote Kent Thompson ever cast? A yes for Medicaid expansion

In this week's episode, we speak with Kent Thompson at his real estate and auction office in Iola. This is the first in a series of episodes with locals seeking elected office and face a primary opponent this August 4. A rural LaHarpe resident, Thompson has represented Kansas's 9th House District, which covers Allen County and much of Neosho County, since 2013. He faces Armando Hernandez of Chanute in this August's primary.

In today’s episode, Richard Luken sits down with Cynthia Carr, longtime Iola Middle School librarian, LaHarpe city council member, and co-owner of the RV Park in LaHarpe. We took some time to talk about her experiences as an educator, her perspective on LaHarpe’s recent progress and the work still to be done in the Allen County community.

"We felt the knee on our neck."

Ana Davis took the stage at Iola’s June 7th rally for Black Lives. Although seemingly a shy soul, Ana delivered a powerful and impassioned speech, insisting we have no time to waste creating a better world for our children. Her youngest son Mack, age 12, stood by her side. Almost two weeks later, on Juneteenth, Tim Stauffer spoke with her about her experiences growing up as a Black American and living in Iola, her thoughts about what needs to change, and how, amidst the tireless struggle for justice, she finds joy.

If not me, then who?

In recent weeks, Daniel and Nicole Schowengerdt of Iola have taken an increasingly active role in fighting for racial justice by attending marches, creating petitions and having tough--but necessary--conversations with friends and family. Tim Stauffer sits down to talk with the couple about motivates them, how they discuss racism with their children and the road our country has left to travel.

Voices from the Black Lives Matter rally in Iola

Yesterday, on June 7th, over 250 people attended a rally on Iola's square in support of Black Lives Matter, using the event to stand against racism, express solidarity with the Black Lives Matter movement, and to commemorate the death of George Floyd. Register staff were in attendance speaking with demonstrators about why they were there and what needs to change. Here are their voices.

Fourteen months in, Rebecca Johnson has had few chances to catch her breath

In this week’s episode, Tim Stauffer sit down with Rebecca Johnson, the director of the Southeast Kansas Multi-County Health Department, to talk about her first fourteen months on the job. In her short tenure, she’s been tasked with leading Allen, Anderson, Bourbon and Woodson counties in their response to the COVID-19 pandemic. Rebecca and Tim talk about what the SEK Multi-County Health Department is doing—as well as where it can improve—in its efforts to keep us all safe and healthy.

The Westervelt family weaves their way on the trails, together

Even before the COVID-19 pandemic, Jaime Westervelt, her parents Mike and Leah Oswald, and Jaime's three children Wyatt, Griffen and Jolee, made very regular use of the trails. Now, though, with the family stuck at home much more, the trails have provided a refuge and escape from these distressing times. And somewhere along the gravel chert paths, they grew closer as a family as well. In this episode, recorded on a rainy May evening, reporter Trevor Hoag and Tim Stauffer accompany the Westervelt family on one of their walks on the Prairie Spirit Trail.

In this week’s episode, we speak with Kurt Jackson of Yates Center. Kurt is a youth motivational speaker and life coach. Our conversation with him--which touched on his battles with depression and alcohol and his journey to health— was originally broadcast via Facebook Live and is part of our effort to recognize May as Mental Health Awareness Month. It’s also a testament to the power of candidly discussing mental health issues.

Pregnant in the midst of a pandemic

Iola residents Katie Mitchell and Kyle Lovseth share what it’s like to be expecting a child in the midst of a pandemic. Katie, a Sociology professor at Allen Community College, is 31 weeks pregnant. She and Kyle are expecting their first child.

Now more than ever, Lisse Regehr sees an Allen County that’s coming together

Register reporter Trevor Hoag, editor Susan Lynn and Tim Stauffer sit down with Lisse Regehr, the CEO of Thrive Allen County, to discuss what she’s hearing from Allen County businesses and individuals in the midst of the COVID-19 pandemic and what Thrive is doing to help.

Next year, Regina Chriestenson plans to savor every moment.

We speak with Regina Chriestenson, the speech and drama instructor at Iola High School, on how she and her students have dealt with the abrupt end to their school year, and for her seniors, their entire high school careers.

Dr. Brian Wolfe of Community Health Center of Southeast Kansas answers our questions about COVID-19 and offers insights on how to best protect ourselves here in Allen County.

Tim Stauffer sits down with Savannah Flory of TLC Garden Center to discuss the life of a small business owner committed to building a stronger LaHarpe.

Ray Maloney and how to build a workforce for the future

Richard Luken and Tim Stauffer sit down with Ray Maloney of Ray's Metal Depot to discuss his efforts to train Allen County's workforce and prepare our kids for the future. He discussed his role in the Regional Rural Tech Center, a USD 257 school bond issue and a new initiative to build tiny homes in LaHarpe.

Step back, slow down: An interview with Dr. Wright of SEK Mental Health

Tim Stauffer sat down with Dr. Doug Wright, Clinical Director with SEK Mental Health Center, to talk about how stress affects families and how best to manage it. Check out sekmhcenter.org for more info.

When a pool isn't just a pool

Tim Stauffer sat down with Susan Lynn, Register editor and publisher, and Trevor Hoag, our newest reporter, to review what happened at Allen Community College's public forum this Monday and what the next steps may be as the college considers its new activities center.

Don Bain: The luckiest guy in the world

This Valentine's Day, Don Bain, a longtime educator, principal and superintendent for USD 257, will be honored between the girls and boys basketball games at Iola High School. In this special episode, Tim Stauffer spoke with Richard Luken about his recent interview with "the luckiest guy in the world."

Tim Stauffer sits down with Linda Womelsdorf to talk about her role as the Health and Wellness Director of LaHarpe, KS.

In this week's podcast, we sit down with Ella Mae Crowell, the mayor of LaHarpe.