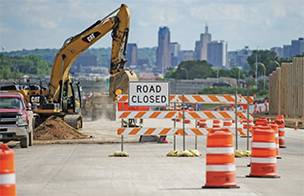 Its refreshing to see the U.S. Chamber of Commerce put partisan politics aside for the sake of our national economy.

This summer, C of C members have been wooing Senate and House leaders to raise the federal fuel tax to address crumbling bridges and highways. Such an effort shows that Chamber leaders, long known for their aversion to taxes, understand what a vital role taxes play in economic development and quality of life.

That its been 26 years since the tax has been raised should be reason enough  were it not that were on the heels of an election year.