Biden: This time, we can’t give up

The devastation at Robb Elementary School was so great that parents had to do DNA swabs to identify the remains of their children. Nine- and 10-year-old children. This isn’t about taking away anyone’s rights. It’s about protecting children, families and communities. 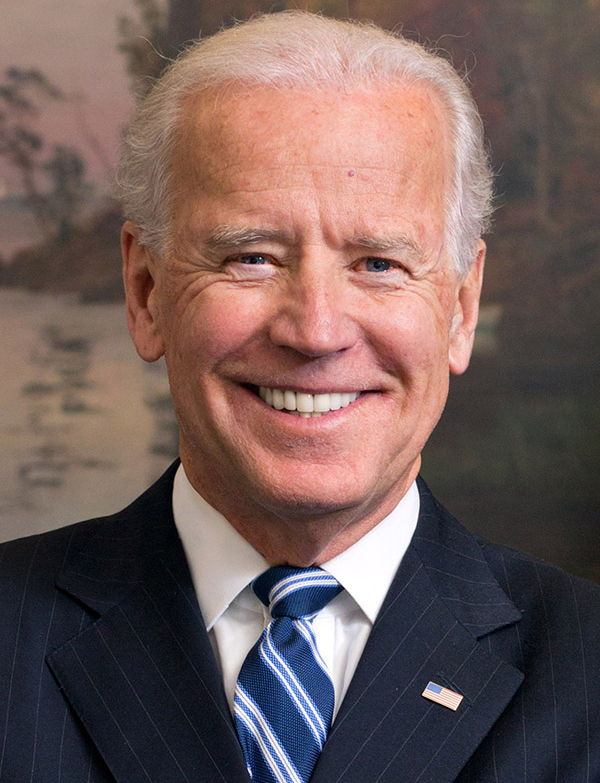 Gifts and makeshift crosses are seen at a memorial dedicated to the 19 children and two adults killed on May 24 during the mass shooting at Robb Elementary School on May 31, 2022, in Uvalde, Texas. (Brandon Bell/Getty Images/TNS)

President Joe Biden gave an address at the White House on Thursday calling for Congress to pass several gun control measures after a spate of recent mass shootings. The following is a transcript of his remarks, as recorded by The New York Times.

Memorial Day, this past Monday, Jill and I visited Arlington National Cemetery. As we entered those hallowed grounds, we saw rows and rows of crosses among the rows of headstones and other emblems of belief, honoring those who paid the ultimate price on battlefields around the world.

The day before, we visited Uvalde — Uvalde, Texas. In front of Robb Elementary School, we stood before 21 crosses, for 19 third and fourth graders and two teachers. On each cross, a name.

And nearby, a photo of each victim, that Jill and I reached out to touch. Innocent victims, murdered in a classroom that had been turned into a killing field. Standing there in that small town, like so many other communities across America, I couldn’t help but think there are too many other schools, too many other everyday places that have become killing fields, battlefields, here in America.

We stood in such a place just 12 days before, across from a grocery store in Buffalo, New York, memorializing 10 fellow Americans — a spouse, a parent, a grandparent, a sibling, gone forever. At both places, we spent hours with hundreds of family members who were broken, and whose lives will never be the same. They had one message for all of us: Do something. Just do something. For God’s sake, do something.

After Columbine, after Sandy Hook, after Charleston, after Orlando, after Las Vegas, after Parkland, nothing has been done. This time, that can’t be true. This time, we must actually do something. The issue we face is one of conscience and common sense.

For so many of you at home, I want to be very clear. This is not about taking away anyone’s guns. It’s not about vilifying gun owners. In fact, we believe we should be treating responsible gun owners as an example of how every gun owner should behave.

According to new data just released by the Centers for Disease Control and Prevention, guns are the No. 1 killer of children in the United States of America. The No. 1 killer. More than car accidents, more than cancer. Over the last two decades, more school-age children have died from guns than on-duty police officers and active-duty military combined.

We need to ban assault weapons and high capacity magazines. And if we can’t ban assault weapons, then we should raise the age to purchase them from 18 to 21. Strengthen the background checks, enact safe storage laws and “red flag” laws. Repeal the immunity that protects gun manufacturers from liability. Address the mental health crisis deepening the trauma of gun violence, and as a consequence of that violence.

These are rational, common-sense measures. Here’s what it all means. It all means this: We should reinstate the assault weapons ban on high capacity magazines that we passed in 1994 with bipartisan support in Congress and the support of law enforcement.

Nine categories of semiautomatic weapons were included in that ban, like AK-47s and AR-15s. And in the 10 years it was law, mass shootings went down. But after Republicans let the law expire in 2004, and those weapons were allowed to be sold again, mass shootings tripled. Those are the facts.

A few years ago, the family of the inventor of the AR-15 said he would have been horrified to know his design was being used to slaughter children and other innocent lives instead of being used as a military weapon on the battlefields, as it was designed. That’s what it was designed for.

ENOUGH. Enough. We should limit how many rounds a weapon can hold. Why in God’s name should an ordinary citizen be able to purchase an assault weapon that holds 30-round magazines that let mass shooters fire hundreds of bullets in a matter of minutes? The damage was so devastating in Uvalde parents had to do DNA swabs to identify the remains of their children. Nine- and 10-year-old children.

I also believe we should have safe storage laws, and personal liability for not locking up your gun. The shooter in Sandy Hook came from a home full of guns. They were too easy to access. That’s how he got the weapons. The weapon he used to kill his mother, and then murder 26 people, including 20 first graders.

If you own a weapon, you have a responsibility to secure it. Every responsible gun owner agrees. To make sure no one else can have access to it. To lock it up. To have trigger locks. And if you don’t, and something bad happens, you should be held responsible.

We should also have national red flag laws so that a parent, a teacher, a counselor can flag for a court that a child, a student, a patient is exhibiting violent tendencies, threatening classmates or experiencing suicidal thoughts — it makes them a danger to themselves or to others. Nineteen states and the District of Columbia have red flag laws.

In Uvalde, the shooter was 17 when he asked his sister to buy him an assault weapon, knowing he’d be denied because he was too young to purchase one himself. She refused. But as soon as he turned 18, he purchased two assault weapons for himself. Because in Texas, you can be 18 years old and buy an assault weapon, even though you can’t buy a pistol in Texas until you’re 21.

If we can’t ban assault weapons, as we should, we must at least raise the age to be able to purchase one to 21. Look, I know some folks will say 18-year-olds can serve in the military and fire those weapons, but that’s with training and supervision by the best-trained experts in the world. Don’t tell me raising the age won’t make a difference. Enough.

We should repeal the liability shield that often protects gun manufacturers from being sued for the death and destruction caused by their weapons. They’re the only industry in this country that has that kind of immunity.

IMAGINE. Imagine if the tobacco industry had been immune from being sued, where we’d be today. The gun industry’s special protections are outrageous. It must end.

And let there be no mistake about the psychological trauma that gun violence leaves behind. Imagine being that little girl, that brave little girl in Uvalde, who smeared blood off her murdered friend’s body onto her own face, to lie still among the corpses in her classroom and pretend she was dead in order to stay alive. Imagine. Imagine what it would be like for her to walk down the hallway of any school again.

Even before the pandemic, young people were already hurting. There’s a serious youth mental health crisis in this country. We have to do something about it. That’s why mental health is the heart of my unity agenda that I laid out in the State of the Union address this year.

This unity agenda won’t fully heal the wounded souls, but it will help. It matters.

I just told you what I’d do. The question now is: What will the congress do?

The House of Representatives already passed key measures we need: Expanding background checks to cover nearly all gun sales, including at gun shows and online sales. Getting rid of a loophole that allows a gun sale to go through after three business days, even if the background check has not been completed.

And the House is planning even more action next week. Safe storage requirements. The banning of high-capacity magazines. Raising the age to buy an assault weapon to 21. Federal red flag law. Codifying my ban on ghost guns that don’t have serial numbers and can’t be traced. And tougher laws to prevent gun trafficking and straw purchases.

But, as we know, in order to get anything done in the Senate, we need a minimum of 10 Republican senators. I support the bipartisan efforts that include a small group of Democrats and Republican senators trying to find a way. But my God. The fact that the majority of the Senate Republicans don’t want any of these proposals even to be debated or come up for a vote, I find unconscionable.

WE CAN’T FAIL the American people again. Since Uvalde, just over a week ago, there have been 20 other mass shootings in America, each with four or more people killed or injured, including yesterday, at a hospital in Tulsa, Okla. A shooter deliberately targeted a surgeon using an assault weapon he bought just a few hours before his rampage that left a surgeon, another doctor, a receptionist and a patient dead, and many more injured. That doesn’t count the carnage we see every single day that doesn’t make the headlines.

I’ve been in this fight for a long time. I know how hard it is, but I’ll never give up. And if Congress fails, I believe this time, a majority of the American people won’t give up, either. I believe the majority of you will act to turn your outrage into making this issue central to your vote. Enough, enough, enough.

Over the next 17 days, the families in Uvalde will continue burying their dead. It will take that long, in part, because it’s a town where everyone knows everyone, and day by day they will honor each one they lost. Jill and I met with the owner and staff of the funeral home, who was being strong, strong, strong to take care of their own. And the people of Uvalde mourned, as they do over the next 17 days. What will we be doing as a nation?

Jill and I met with the sister of the teacher who was murdered and whose husband died of a heart attack two days later, leaving behind four beautiful, orphaned children. All now orphans.

After visiting the school, we attended Mass at Sacred Heart Catholic Church with Father Eddy. In the pews, family and friends held each other tightly. As Archbishop Gustavo spoke, he asked the children in attendance to come up on the altar and sit in the altar with him, as he spoke. There wasn’t enough room, so a mom and her young son sat next to Jill and me in the first pew.

And as we left the church, a grandmother who had just lost her granddaughter passed me a handwritten letter. It read, quote: “Erase the invisible line that is dividing our nation. Come up with a solution and fix what’s broken and make the changes that are necessary to prevent this happening again.” End of quote.

God bless the families who are hurting. God bless you all. From a hymn based in the 91st Psalm, sung in my church: “May he raise you up on eagle’s wings and bear you on the breath of dawn. Make you to shine like the sun and hold you in the palm of his hand.”

That’s my prayer for all of you. God bless you.