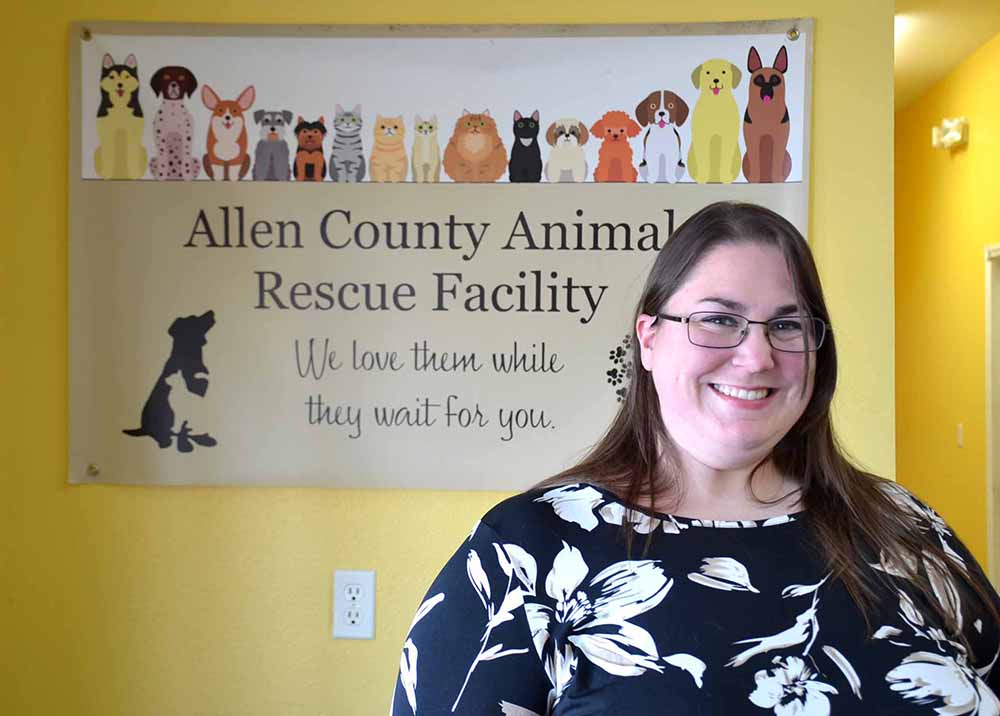 Brittni Israel has worked at the Allen County Animal Rescue Facility (ACARF) for six years. She has taken the helm as director after Janice Porter's death in December.

Growing up, Brittni Israel’s home in Westphalia seemed to be a dumping ground for unwanted dogs.

A nonstop parade seemed to make their way to her.

Maybe it was a coincidence. Or maybe desperate pet owners knew Israel and her family would find the dogs a good home.

Israel’s love for animals has shaped her career. She recently was named director of the Allen County Animal Rescue Facility in LaHarpe.

Israel started at ACARF six years ago, working part-time as a kennel technician. She later came aboard full-time, and about two years ago was promoted to assistant director.

For the past year, Israel handled the on-site duties up while longtime director Janice Porter battled cancer. Israel had helped her mother through health problems, so she wanted to step up and help Porter as much as possible.

“You want to do everything you can to help. You want to take the illness away for them, but you know you can’t do that,” Israel said. “So I wanted her to not have to focus on the shelter, at least.”

As the new director, Israel wants to continue Porter’s legacy. She’s planning to bring back the shelter’s successful spay and neuter program, which will be made possible by a grant from Walmart and memorial donations made in Porter’s honor.

“That was a big passion of hers and mine,” Israel said.

Vouchers for the program will be available starting next week. All pet owners who live in Allen County are eligible to take advantage of the program, which includes some vaccinations.

Vouchers will be available until funding runs out. Israel hopes others will continue to donate to keep the program going.

The shelter offered a similar program a couple of years ago, and it was a big success.

The shelter also offered a Trap-Neuter-Return program a few years ago, encouraging residents to trap feral cats in their neighborhoods, have them spayed or neutered, and return them to the area where they were found. The idea is to reduce the number of feral cats by preventing their ability to breed, and those cats will keep others from invading their territory.

It’s been about four years since about 70 cats were fixed. Since then, the shelter has seen a significant decrease in the numbers of unwanted cats.

Before that program, ACARF typically had a waiting list of more than 100 cats. Now, they typically have about 60 cats. The numbers seem to be going up, though, Israel said.

“I’ve always been big on spaying and neutering. I want to see fewer homeless animals.”

Education is another key to reading the numbers of homeless pets, she said. Nearly everyone loves puppies and kittens, but not everyone is prepared to handle the challenges that come with raising a dog or cat.

“A lot of it is a lack of understanding about that responsibility. My ultimate goal is to offer a counseling session before adoption,” she said.

The shelter is converting some of its space into a meet-and-greet room, where families can get to know an animal prior to adoption.

Through the pandemic, the shelter has been open by appointment only. That’s made it easier for Israel and staff to adapt to the transition in directors, and also gives them a better opportunity to meet with families one-on-one to find a pet that suits their needs.

Israel also wants to expand the shelter’s network, developing better working relationships with other animal rescue organizations and shelters across the region. A long-term goal is to expand the building and ACARF’s ability to take more pets.

“Every day there’s a call for a dog or cat that needs a home,” she said. “You can’t take them all, as much as you want to. But it’s not about just finding a home for them. It’s about finding the right home.”