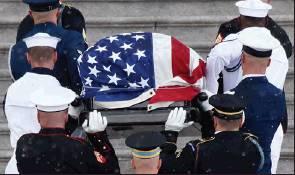 A Military Honor Guard carries the casket of U.S. Sen. John McCain (R-AZ) as it arrives at the U.S. Capitol on Friday in Washington, D.C., prior to a Lying in Honor ceremony in the Capitol Rotunda. Olivier Douliery/Abaca Press/TNS

WASHINGTON  The skies outside the Capitol opened up Friday morning as a military honor guard carried the flag-draped casket of Sen. John McCain up the stairs of the Capitol before bright sunshine later emerged. Inside, Vice President Mike Pence and congressional leaders feted a man who was a walking force of nature.

Senate Majority Leader Mitch McConnell called the Arizona Republicans death a great loss for the country but told a packed Capitol Rotunda they were gathered to celebrate a great life that featured six decades of devotion to the American idea and the cause of human freedom.

We marvel at the man who lies before us, McConnell said, his words echoing under the Capitol Dome. The cocky, handsome naval aviator who barely scraped through school then fought for freedom in the skies.