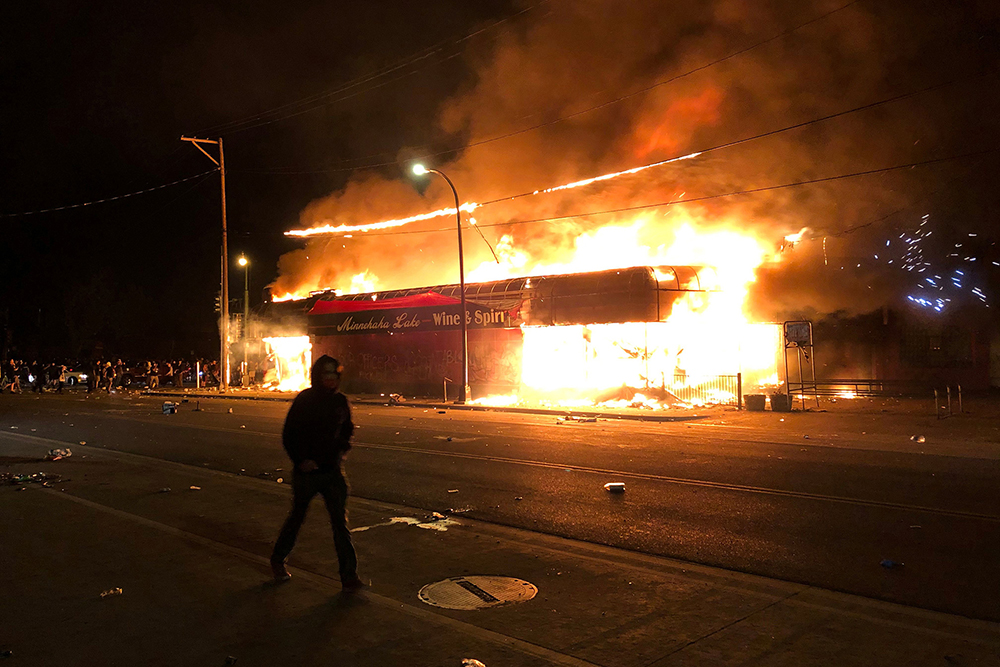 A Minnesota police officer has been charged in the death of George Floyd, after a video showed the officer kneeling on Floyd's neck. The charges come as protests have grown violent across the city, and elsewhere.

Flames rise from a liquor store near the Third Police Precinct on Thursday in Minneapolis, Minnesota, during a protest over the death of George Floyd, an unarmed black man, who died after a police officer kneeled on his neck for several minutes. Photo by Kerem Yucel / AFP via Getty Images

MINNEAPOLIS (AP) — The police officer who was seen on video kneeling on the neck of George Floyd, a handcuffed black man who died in custody after pleading that he could not breathe, was arrested Friday and charged with murder in a case that sparked protests across the United States and violence in Minneapolis.

Hennepin County Attorney Mike Freeman said Derek Chauvin was charged with third-degree murder and manslaughter. Freeman did not provide immediate details, but said a criminal complaint would be made available later Friday and that more charges were possible.

In the video, Chauvin is seen kneeling on Floyd’s neck as Floyd is on the ground. He gradually becomes motionless as Chauvin and three other officers ignore bystanders’ shouts to get off him. Freeman said the investigation continues into the other three officers, but that authorities “felt it appropriate to focus on the most dangerous perpetrator.”