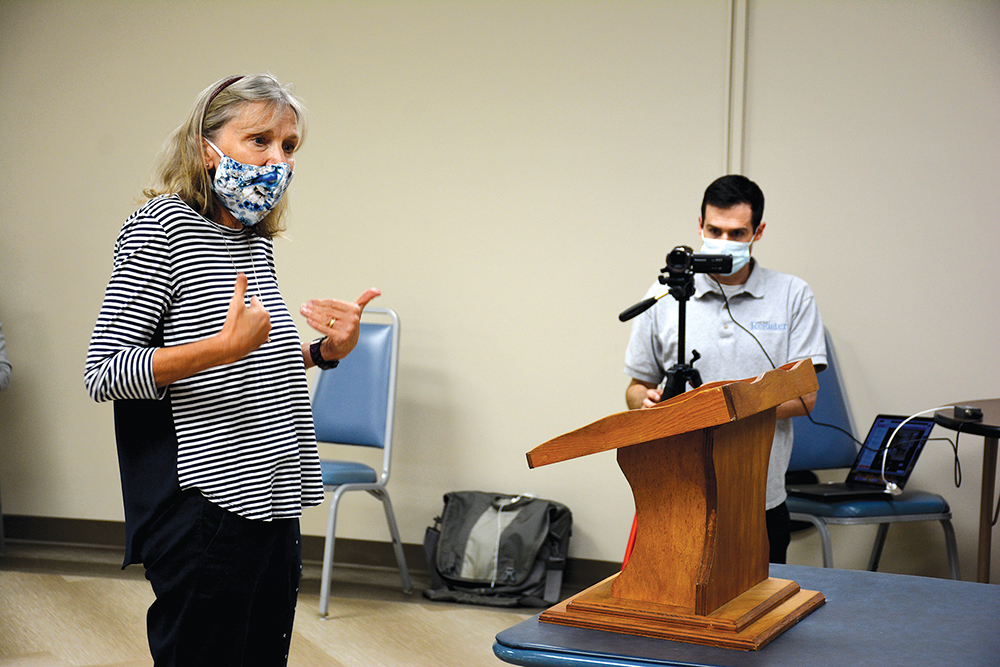 Thursday, Allen County commissioners took no action during a special meeting to opt out of or otherwise nullify Gov. Laura Kelly’s face mask mandate, which means that for now the executive order stands.

The order went into effect at midnight Friday, and states that most Kansas residents are to wear a face mask in indoor public spaces and in crowded outdoor spaces where social distancing is not possible.

The primary justification for upholding the mandate was based on a recommendation from the county health officer, Rebecca Johnson, who also serves Anderson, Bourbon and Woodson counties.

COMMISSIONER Bruce Symes said that he “takes the virus very seriously,” but that “a word like ‘mandate’ gives [him] the heebie-jeebies.”

He said people have a “right to make responsible decisions on [their] own.”

He also said he was concerned with “government overreach” and thought that a “one size fits all approach” to COVID-19 had hurt Allen County.

Symes said his initial position, therefore, was to come out against the mandate, but after a few days decided to instead “look to our medical experts … [and] follow our health officer’s recommendations.”

“If wearing a mask can help us move forward,” he suggested he was willing to let the order stand in order to keep the economy functioning.

Commissioner Jerry Daniels said that he has “a relative who has COVID” and therefore “thinks it’s real.”

Daniels repeatedly emphasized that he wished the governor’s executive order used language like “strongly recommend” as opposed to “mandate,” and said he was convinced that the order could not be meaningfully enforced.

However, he also said “we did say we would follow our health director’s opinion,” and therefore did not move to extricate Allen County from the mask mandate.

Daniels further asked residents to be courteous towards one another regarding masks “whether you like [the order] or not.”

Commissioner Bill King also altered his position over the week, saying “I was prepared to vote against this until our health director spoke.”

“We want to do what’s right for the community,” he said.

It’s possible the commission could change its position moving forward.

Commissioners said they would revisit the issue at their 8:30 a.m. Tuesday meeting.

ALONG with commissioners, other members of the Allen County community made statements on the mask mandate.

Dr. Brian Wolfe described the order as a “pretty essential part of how we can keep our community safe,” and looked for “leadership to set the tone” on the issue.

Nich Lohman called the order “a pretty simple, low-tech way to deal with [COVID-19],” and added “this is a good, simple way to keep things going and I support it.”

Donna Houser also said she was looking for “leaders to lead” on the issue, and drew upon her time as a dental hygienist to advocate for the health benefits of mask-wearing.

By contrast, Jennifer Coltrane spoke out against the mandate, pointing to low rates of infection in the area, as well as what she called a “burden on individuals and businesses.”

“I just don’t think you can mandate kindness,” she said, in reference to Commissioner Daniels’ request to be courteous to one another.

Lisse Regehr, CEO of Thrive Allen County, advocated for the mandate on both health and economic fronts, saying it’s the “easiest way to make sure we aren’t shut down again.”

In order to “protect everyone around me” and make sure “kids are back in school, … this is the easiest way to do it,” she said.

Paige Olson emphasized how wearing a mask protects other people, not just oneself, and used the analogy of food preparation laws designed to keep people safe.

Tracy Keagle agreed, saying “not wearing a mask is like playing Russian roulette,” whereas wearing one is “just an act of kindness.”

BY CONTRAST, Bob Garrett spoke out against the mandate, saying he was opposed to “a one-size-fits-all solution in Kansas.”

He called the situation in Allen County “a minimal problem,” and said he thought the mandate was a “total infringement upon our rights.”

In order to advocate for the mandate, the Rev. Dan Davis pointed to the four ethical questions asked by Rotarians, and especially emphasized No. 4: “Will it be beneficial to all?”

He also argued that “every major religion that I know of says treat others the way you would like to be treated.”

Karen Works spoke in favor of the mandate as well, and used an analogy to anti-smoking laws, noting that when restrictions on smoking were put in place for public health purposes, people also resisted.

“This is what this is about, too” she said. “The health of the community.”

Cole Herder, Humboldt city administrator, added that he thought the mandate contained “a lot of latitude so as not to infringe upon people’s rights.”

Several exemptions exist under the mandate, including:

Those with medical condition disabilities that prevent wearing a face covering;

Those who are deaf or hard of hearing where the ability to see the mouth is essential for communication;

Those dining at an eating establishment, and

Athletes engaged in an organized sports activity that only infrequent or incidental moments of proximity closer than the recommended 6 feet occur.