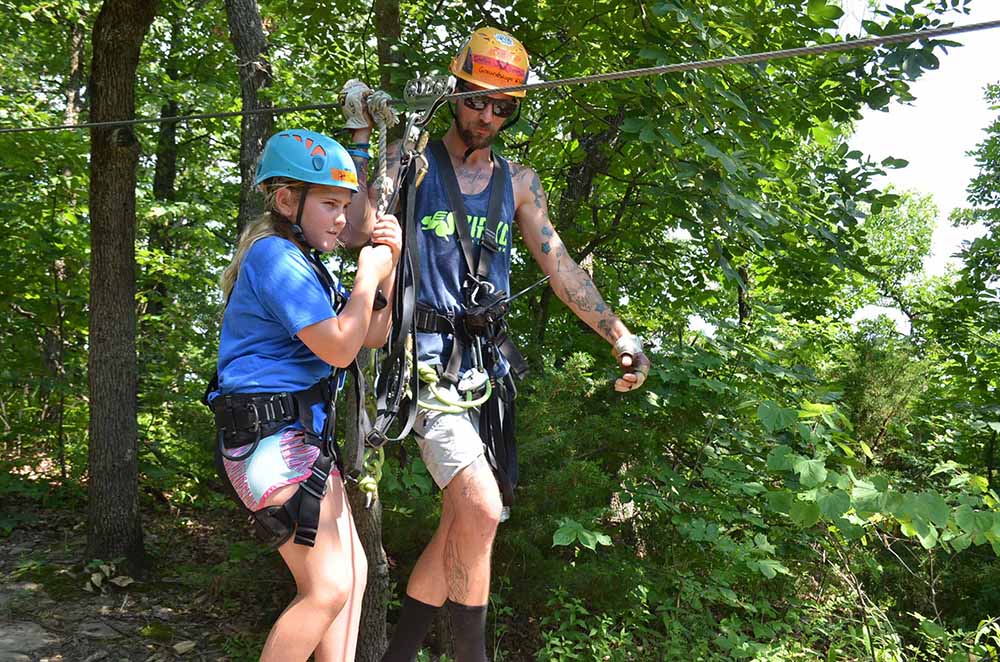 The summer program taught students about Amelia Earhart, then took them to Atchison to visit the famous pilot's birthplace and the Hangar Museum. Then, students went on a zip line adventure.

Breighlynn Rutherford, nicknamed “Hot Thumb” because of a softball injury, readies herself to step off a platform to soar above the trees at Zip KC, a zip lining adventure tour near Bonner Springs. SAFE BASE students went zip lining and visited Amelia Earhart’s birthplace and the Hangar Museum in Atchison. Photo by Vickie Moss / Iola Register

After soaring over treetops, secured by a harness attached to a zip line, Ethan Sutterby said he felt “like Tarzan.”

During his fourth and final ride, Ethan leaned back and spread his arms wide. He flew through the air, the tips of his fingers brushing leaves as he passed.

Sutterby and 15 other students from the SAFE BASE Summer Program attended a high-flying adventure in Atchison and Bonner Springs Thursday. They’ve been learning about aviation and Amelia Earhart this week, so Thursday’s field trip gave them a chance to spread their wings.

Younger students traveled to Wichita’s Exploration Place, while the older students took part in something a little more adventurous.

At Atchison, they toured Amelia Earhart’s birthplace and visited the new Hangar Museum, which is not yet open to the public. It contains the last remaining Lockheed Electra 10-E airplane, the same type of plane Earhart flew on her final mission.

After learning about Earhart, the group then traveled to Zip KC at Bonner Springs for a zip line adventure. They zip lined four routes, starting with a short trip through the woods and progressing to a longer, higher line above the trees.

Students and 12 adults, including SAFE BASE staff members and parents, split into four groups. Each group was headed by two tour guides, who helped them put on harnesses and helmets. Participants gave each other nicknames, writing on each other’s helmets so no one knew what their name was until the tour guide shouted it out before the first run.

Ethan’s nickname was “Cupcake.” This reporter was named “Smiles.” Others boasted monikers including “Bandit,” “Hot Thumb” and “Miss IDK.”

Once safely harnessed, groups rode a bus to the top of the route, then hiked short distances between zip line courses. The temperature sat around 100 degrees most of the day, but the tree canopy and the breeze from riding the zip lines helped cool them a little.

The zip line tour was the highlight for students.

Alyssa Williams said she hadn’t zip lined before and had a lot of fun. The best part was the interaction with the tour guides, she said. They joked around throughout the tour.

“I got to give one of our tour guides sass,” she said. “It was really fun.”

At one point near the end of the tour, students asked if they could remove their helmets. Tabitha said no, adding: “You don’t want to be concussed by a saucy squirrel.”

For the most part, students eagerly stepped up to the platform and didn’t hesitate to leap into the unknown.

Layla Fry, aka “Rugrat,” needed a few moments to prepare herself before each of her trips on the zip line, but managed to complete the course. On the final leg, Tabitha played the theme to “Mission Impossible” to encourage the girl.

“That was fun,” Layla said afterward, but added that she probably wouldn’t want to do it again.

Other students, though, eagerly agreed they would enjoy another tour.

Earlier this week, students watched a National Geographic documentary about Robert Ballard’s attempts to find out what happened to Amelia Earhart.

Ballard is a native Kansan who discovered the final resting place of the Titanic, and he’s been exploring the South Pacific in a quest to solve the mystery surrounding Earhart’s final flight.

Earhart, a famous aviatrix who broke numerous flying records, disappeared July 2, 1937, while attempting to become the first female to circumnavigate the globe.

Earhart was born at the home of her grandparents in Atchison, and lived there until she was 12. In 1984, the house was given to the International Ninety-Nines, an organization of women pilots that Earhart helped form and of which she served as the first president.

Tour guides led SAFE BASE students through the home, telling stories about Earhart’s life and career.

For example, as a child Earhart and her younger sister, Muriel, built a “roller coaster” ramp on top of a tool shed on the family’s property. Amelia slathered the ramp with lard, and flew straight off the roof of the shed. She picked herself up, a little bit bruised but with a desire to fly.

She later earned her own money to learn to fly. Though she wasn’t the only woman to fly airplanes, she soon became one of the most famous.

The mystery surrounding her disappearance has led to numerous theories. Some speculate she and navigator Fred Noonan may have crashed in the ocean and died; others suggest they ended up on an island somewhere in the South Pacific.

Various searches at that time and decades later only served to deepen the mystery.

Angela Henry, SAFE BASE director, told students she believes Ballard or another explorer will one day discover the plane’s wreckage.

And when that happens, the students will know exactly what it looked like when it disappeared, she told them at the Hangar Museum in Atchison, standing in front of the only remaining Electra 10-E left in the world.

“One of these days, when you hear in the news that he has found her plane, it will look just like this,” Henry said.

The airplane was restored to look exactly the same as Earhart’s plane, all silver with red-tipped wings and a round antenna above the cockpit.

Only a small number of the planes were made, and they were often used as passenger planes for airlines. They could hold up to 12 people.

This particular plane once flew passengers for Pan Am, then was sold for use as a skydiving plane in the 1970s. It wasn’t a very good skydiving plane though, Hangar Museum director Allison Balderrama told SAFE BASE students. Skydivers had to climb through a small door and make their way to the wing, where they stood awaiting their turn to jump as the plane flew through the sky.

In the 1980s, the plane was sold and ended up in a museum in Florida for about 10 years. Then, it was bought by a woman pilot who was searching for the exact same plane flown by Earhart. She spent 30 years renovating it to flying condition as a perfect replica of Earhart’s plane. She planned to recreate Earhart’s final flight, using the same navigational methods and maps from the 1930s.

The plane was renamed “Muriel,” after Earhart’s sister.

However, health problems forced the woman to abandon her plans and she sold the plane to a foundation that created the Hangar Museum. The museum is still under development and is open only by appointment.

SAFE BASE participant Breighlynn Rutherford said she enjoyed seeing the plane. She’s never flown before and was fascinated to see something with such historical significance.

“It has a lot of colors and it’s big,” she said. “I’ve never seen an airplane this close before.”