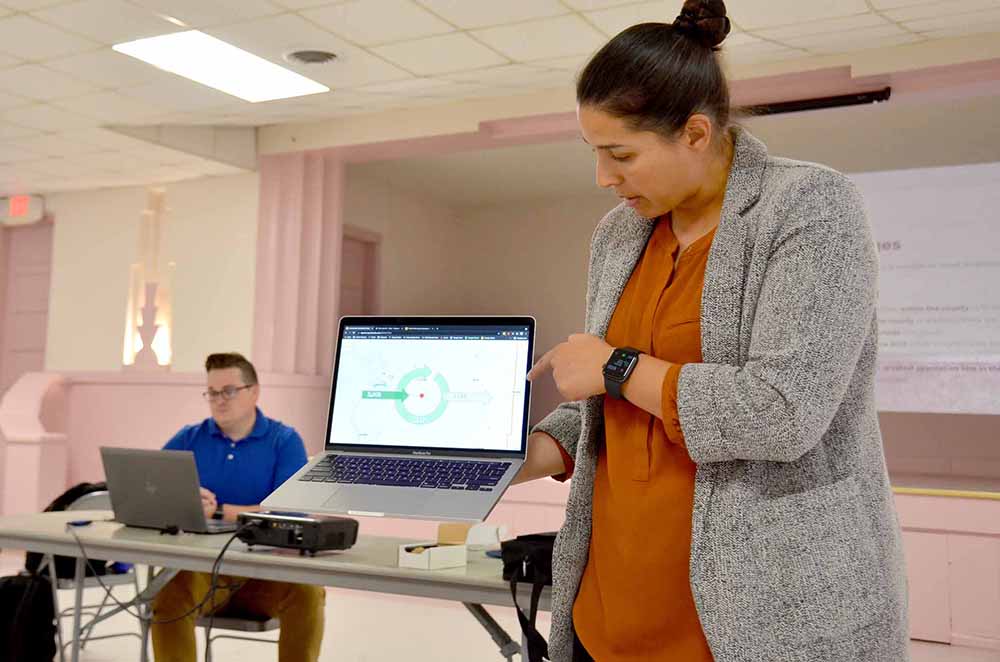 Keys to a better Allen County

Atlas/McClure is working with Thrive Allen County to develop a strategic plan for housing and economic development. The group was wrapping up final meetings to gather information and data this week.

Alex Holland, vice president of Atlas Community Studios, shows a graphic that indicates 3,151 people live and work in Allen County, while 2,642 work here but don’t live here, and 3,185 live here but work elsewhere. At left is Clint Sloss with McClure. The companies are working with Thrive to develop a strategic plan for housing and economic development. Photo by Vickie Moss / Iola Register

It’s probably not surprising, but most Allen County families can’t afford to build a new house.

Another fact: Allen County’s housing vacancy rate is much higher than the state’s.

Those are some of the findings from a preliminary look at housing and economic development issues in Allen County.

The groups have been collecting surveys and data since July, hoping to gather enough information to help them come up with a strategic plan to address three key areas: housing, economic development and building revitalization regarding a former funeral home known as the Thrive Annex.

The group returned to Allen County this week for final meetings with key officials.

They had a public meeting on Monday; attendance was small, with just a handful of audience members.

At the event, attendees heard from Alex Holland, vice president of Atlas, and Clint Sloss, economic development specialist with McClure.

They shared some of the early findings and offered a timeline for their report and implementation plans.

The cost to build a new house outpaces the wages for a majority of Allen County residents, Sloss noted.

That’s much more than the median income for Allen County residents, which works out to $3,778.

“We need to look at the gap between what we can afford and what is the true cost,” Sloss said.

But the problem isn’t just with new housing.

And nearly 43% of  Allen County houses were built before 1959, compared to the state average of 35%.

“We have a lot of older homes, which have a higher cost of maintenance, higher costs to make improvements,” Sloss said.

Further, studies show that 15% of Allen County housing units are vacant, compared to the state average of 11.3%. Sloss is optimistic the situation isn’t quite that dire; that number likely includes houses that are so dilapidated they cannot be occupied, but are still considered rentals in that particular study.

“There’s barely anything available to purchase or rent,” Sloss noted.

“People may want to move here, but if they can’t find the housing type, style or quality they want, they’re less likely to do so.”

The local labor pool is not able to meet employer demand, Sloss and Holland reported.

Housing, transportation and child care are some of the major reasons why someone may choose to live elsewhere, they noted.

Businesses and industries can find ways to partner with community groups to offer solutions, Holland said.

A recurring theme in all areas was collaboration. Holland noted the area has many groups, organizations and businesses that have successful programs. But those groups don’t always work together or understand what the others are doing.

In terms of housing and workforce development, companies can offer creative opportunities to help employees.

Perhaps that could include transportation, such as offering a bus that will pick up employees for work. Large companies report a significant portion of their workforce that doesn’t have reliable transportation; one local company had 50 such employees.

Allen County and Thrive offer some public transportation, but nothing exists solely for the purpose of getting people to and from work.

Another option for housing could be for cement companies to offer free or discounted foundation, sidewalk or driveway pours to build a new house.

She pointed to the success of industries like B & W Trailer Hitches and Monarch Cement in Humboldt, which are known for giving back to their communities. Those efforts pay off in employee satisfaction and help with recruitment.

Allen County’s population continues to decline, and has dropped about 6.5% between 2010 and 2019. The biggest population losses came between the ages of 25-54 — prime working ages.

On the plus side, about 61% of those who are eligible to work, do so.

“They’re usually more productive and there’s usually a higher retention rate when employees live near their workplace,” Holland said. “Of course, we want them to be taxpayers and shop at our businesses as well. It’s mutually beneficial.”

Because so many workers come from outside Allen County, it’s also important to take a regional approach, Holland said.

Again, Holland noted the importance of a regional approach is key to economic development.

She noted 73% of those Atlas has surveyed report the county government is moving in a positive direction.

“There’s just not enough collaboration. Good things are happening here but everyone is kind of doing their own thing,” Holland said.

“While we’re supportive of each other, we’re not moving in the same direction, together, with the same goals in mind.”

Allen County has much to brag about when it comes to recreation and amenities, Holland noted.

“The trail system is really impressive, not just for a county of this size but anywhere,” she said.

She pointed to statistics about the popularity of bicycling, which is an $83 billion industry.

Base Camp in Humboldt, located next to the Southwind Trail with easy access to Iola’s trail system, is another attraction that will draw cyclists and other outdoor enthusiasts.

“When the world shut down last year, where did folks look first? They wanted to go back to their hometowns and get outside,” Holland said. “It seems like every single person on the planet bought a bike.”

And again, she noted the importance of collaboration.

“Being able to market that in a cohesive way is important. How are we going to promote our area so people want to come here and live here?”

Allen County earned the “Culture of Health” prize from the Robert Wood Johnson Foundation in 2017. Though local residents may take something like that for granted, Holland pointed out it could be a useful marketing tool to recruit people to the community, as it shows a commitment to healthy living.

“We’ve been able to glean a lot of insight into what’s going on here that makes it a really great place to live,” Holland said.