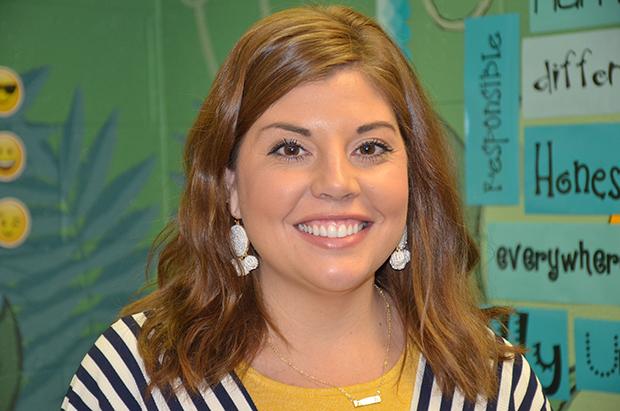 Getting kids to just keep swimming

Charged with explaining to a third-grader the meaning of the word perseverance, a dictionary is about as useful to you in this moment as a bale of hay.
PERSEVERANCE:  explains one popular online resource  the steady persistence in a course of action, a purpose, a state, etc., especially in spite of difficulties, obstacles, or discouragement. See steadfastness, see indefatigability.
Perhaps a better ally in this task, then, is the scene from the Pixar movie Finding Nemo, in which a plucky blue surgeonfish named Dory urges her fellow fish, as they stare into the face of a certain underwater difficulty, to just keep swimming.a
When life gets you down, you know what you gotta do? Dory sings out. Just keep swimming, just keep swimming.
Its pushing through when things get hard, said Lincoln Elementarys new school counselor, Ariel Nothern, who pioneered this particular Finding Nemo lesson plan. I tell the kids to think about this when they get to a hard question on a test. You dont just give up on the whole test. Maybe you skip it, move on, and then go back if you have time. But you dont give up. You just keep swimming.
Should the words meaning continue to elude a students grasp, however, Nothern has another teacherly trick in her back pocket, this one involving Warheads, that fearsome piece of hard candy whose acidic outer layer inflicts on its human victims an almost painful degree of sourness.
Having distributed to the class the requisite number of Warheads, Nothern challenges those few students brave enough to savor the astringent candy not give up on it. Even though their salivary glands are a-prickling and their faces are a-pucker: just keep swimming.
We talk about how thats perseverance, said Nothern. How at first something might be sour but, if you push through, it will get sweeter. And then they remember the word, because theyve got something [tangible] to go with it.

NOTHERN, who arrived in Iola from the Auburn-Washburn school district in Topeka, is in her second year as an elementary school counselor.
Notice: school counselor, not guidance counselor.
Thats a big push in the counselor community, Nothern said, to no longer be referred to as guidance counselors. Guidance makes it sound like were only making schedules for classes and focusing on careers and colleges and things like that. But we encompass a lot more than that.
And while a fair portion of Notherns day does involve goal setting and aptitude assessment and academic planning, it isnt her main burden. Personally, I focus more on the emotional side of things, said Nothern, who completed her undergraduate education at Baker University in Baldwin City before obtaining a masters degree in counseling from MidAmerica Nazarene University in Olathe in 2017. I focus a lot on perseverance, kindness, empathy, feelings and how to deal with them. I just think that if a student has something else bigger going on in their life, is that math test that important to them? No.
According to the American School Counselor Association, the student-to-counselor ratio at a school should be no higher than 250 to 1. The national average, however, at least according to the most recent data (2014-15), is 482 to 1. Kansas, which averages 473 students to every one counselor, also fails this ideal. Worse still was Notherns previous job in Topeka, where her K-6 caseload included more than 600 students.
USD 257, on the other hand, offers Nothern a much happier prospect. The student population at Lincoln Elementary, which serves the districts third- and fourth-graders, stands at a manageable, ASCA-compliant 200 students.

THE CHALLENGE for a school counselor in rural Kansas, where the grammar surrounding issues of mental and emotional health isnt perhaps as familiar as it might be in an urban district, is to find a way to affirm the reality of a students inner life in the face of a culture that doesnt always accord it its proper due.
I think sometimes, as adults, we dismiss young kids emotional [strife], Nothern said. Kids will come to you with something that seems like the littlest problem in the world. But you have to take a step back and realize that this is huge for them, this has ruined their entire day. Personally, I was raised with the idea  you do not cry. And I think that is still how the majority of people are raised. I always tell kids, All feelings are OK. I just had a kid in here this morning who said, Sometimes I just want to cry. And I said, Then cry.
Its OK to cry, its OK to feel sad, its OK to feel angry. Its just important to have the tools to get back to feeling OK.
Lest anyone think that the counselors office is a repository for bad news and emotional upset exclusively, Nothern is at pains to remind her students that they can come to her with good news, too. I tell them if something great is going on in your life, share it with me! I want to know that as well.
Anyway, much of what Nothern does in the course of a year revolves around the 30-minute lessons she presents on a staggered schedule to each classroom at Lincoln Elementary. The lessons  whether on mindfulness or perseverance or empathy  are born of the premise that a school, even before it is a mill for learning, is first and foremost a human place, and that the only value that can truly sustain it is kindness.
Actually, said Nothern, I always end my lessons the exact same way. I teach them a phrase in sign language. By the end of the year, all the kids can do it. Its the same phrase every time. Nothern goes quiet. Her hands, tracing a complicated pattern in the air, assume a new fluency: Be. Kind. To. Yourself. And. Be. Kind. To. Others.