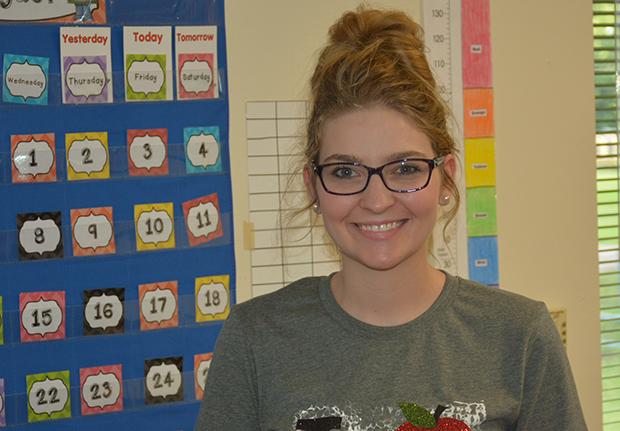 Stephanie Defebaugh knew a teaching career was in her future  as soon as the timing was right.
But that took a while to find.
Stephanie graduated from Pittsburg State University in December 2015 with a teaching degree, setting in motion a whirlwind two years of major life events.
She married Andrew, a fellow PSU student, in June 2016. Nine months later, to the day, the couple welcomed son, Blaine.
Adding to the drama, Andrew surprised the family with a puppy on the same day they brought Blaine home from the hospital.
If that wasnt enough, the Defebaughs decided to build their own home not far from where Andrew grew up on the outskirts of Fort Scott. They moved in a week before Blaines first birthday.
And now, with the pace slowing just enough, Defebaugh is ready to embark on her teaching career. She was hired this year as kindergarten instructor at McKinley Elementary School.
Defebaugh greeted 16 wide-eyed youngsters to her classroom last week.
Teaching was always in the cards, she said. I never changed my major, and never really considered anything else. In the span from graduation to marriage to now, I did some social services work and after-school care, but the timing just wasnt right for my career. Now, I feel like Im in the right place at the right time. Its great Im in Iola, even though it took three years after graduation.

JUST AS she always knew she wanted to become a teacher, Defebaugh, who turns 27 in October, was equally certain shed be teaching kindergartners.
Perhaps its their unbridled enthusiasm that she finds so appealing. Or the teachable moments, when a foreign concept suddenly becomes clear.
Or maybe its more simple.
I like the hugs, she said with a shrug.
Defebaugh recalled an incident on the second day of school, when Angie Linn, McKinley Elementary principal, walked into the classroom.
One of her students, as he had been instructed to do, raised his hand.
But before Defebaugh could call on him, the pupil made an emphatic declaration to his principal.
He shouted out I sure love you! Defebaugh said.
Rather than chastise him for speaking out of turn, Defebaugh simply smiled. After all, hed raised his hand.
I like my little people, she said. I know that with children at this age, if theyre able to receive effective one-on-one instruction, they have a better chance of retaining that learning ability.
Defebaugh is particularly eager to see McKinleys ongoing student mentoring program, in which fifth-graders from Iola Middle School visit McKinley on a regular basis for one-on-one work with the young pupils.
As an aside, Defebaughs kindergarten teacher from her native Independence retired in May, just as Defebaughs career is launching.
I remember all of my teachers, but two, kindergarten and second grade really stick out, she said, just from their caring aspect.
During the interim between college and McKinley, Defebaugh occasionally served as a substitute teacher for upper grades in Fort Scott.
To those teachers who work with middle-schoolers and up: bless them, Defebaugh joked. Its definitely not my strong suit.

DEFEBAUGH had a simple list of criteria she considered after deciding over the summer it was time to start her teaching career.
She preferred schools with smaller class sizes, for more one-on-one interaction.
And it had to be a place shed be willing to send her son to school.
Iola was an easy choice, she said.
McKinleys atmosphere, with only kindergartners, was an unexpected surprise, she admitted.
Id never seen a school district where kindergarten was all in one school, she said.
As she arrived at McKinley, Defebaugh reached out to the other instructors.
They are phenomenal, she said. I asked questions, and they give me advice, what has worked, options to consider. I never realized it until I got here, but Ill probably have some of these teachers and other faculty as long-term friends. Im definitely blessed with the ladies I work with.
This school and district have blown my first few days of teaching out of the water, she continued.Their resources and suggestions and opinions have helped me, even though Ive only been teaching a few days. Im eager to see what a full week will look like.