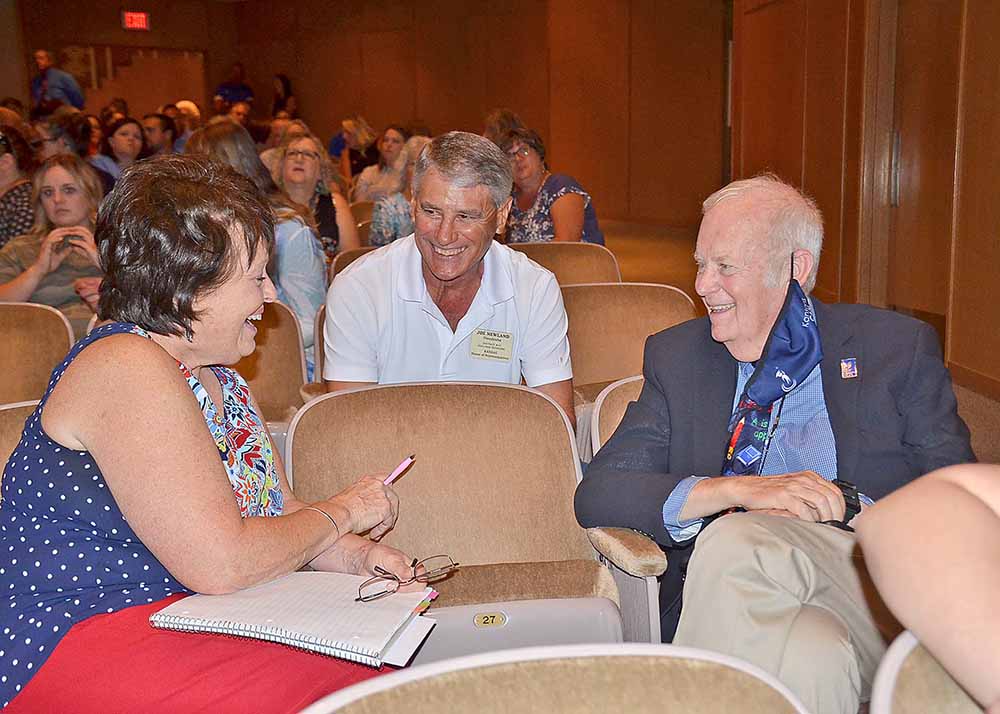 Education gets a reboot

The education model needs to be revamped, state officials say, and they're visiting communities across the state to talk about what may be needed. They met in Iola on Monday.

A company can’t wait 100 years to upgrade its business model.

Education should be no different.

“But we have only two models. One-room schoolrooms of 100 years ago, and today’s outdated model,” which is in the process of being revamped, said Randy Watson, Kansas Commissioner of Education.

Rather than using state assessment scores to gauge a student’s success in high school, educators are looking to redesign the material and school experience so that they are better tailored to students’ skills and abilities, helping them develop into critical thinkers who address real-life problems.

“We all know a student’s ACT scores will never be looked at again once he’s out the door,” Watson said of the standard exam used for college applications.

The two are visiting more than 50 school districts as a follow-up to a similar effort in 2015, when they first began studying how to revamp the delivery of education in Kansas.

“We believe we can be a world leader in how to educate children,” Neuenswander said. “And while we do a pretty good job now for many kids, we need to reach every student.”

Their goal Monday was to assure educators that change is on the horizon and that they are aware of educators’ challenges as well as their successes.

“I bet you didn’t see it on Twitter, but you are moving the needle in improving children’s education,” Watson said, acknowledging that their efforts are often overlooked.

“Our goal is a 95% high school graduation rate,” he said. “No state has achieved that, but we’re making progress.”

Kansas’ graduation rate is 91%, an increase of 2.6% over the last several years.

Changing the focus of education to a more individualized style of teaching is more effective at reaching students and keeping them in school, he said.

Specifically, that involves knowing each student so well that you can help them strengthen their weaknesses and further develop their talents and skills so that they have a real-world application. It also involves developing better relationships with students’ families and building partnerships with local businesses and community organizations.

“Essentially, we need to reorganize our schools around students, not the system. And it’s a very hard thing to do because education has been designed to be very efficient. We move kids from grade to grade according to their age, the content being taught, and how long it should take to finish a curriculum.

“The only qualification to becoming a third-grader is to be 9 years old,” he said.

That model pigeon-holes students to a curriculum, and not the other way around.

English is their second language. “Typically, we think of these students speaking Spanish. But at Wyandotte High School, for example, there are 110 languages being spoken,” he said. Among these students, graduation rates have increased by 6.5%.

Students with disabilities have seen a 3.1% increase in graduation.

Students that receive free and reduced-price meals. “Far and above, these children are the hardest to reach,” Watson said. “Poverty is a huge barrier to success.” Graduation rates for this demographic have increased 3.7% in Kansas.

The biggest learning gap between students is in kindergarten.

Some students will begin school on par with second- and third-graders. Others won’t know their letters, numbers or colors.

“And they’ll spend the next 13 years trying to catch up,” Watson said.

“Kansas has to have high-quality preschools,” he said.

In 2017, the state began funding preschools, with a goal to ensure that all students entering kindergarten are socially, emotionally and academically prepared.

It’s on the basketball court or playing in the school band or orchestra, belonging to FFA or or the debate club that students learn how to develop a good work ethic, a professional and respectful demeanor, and a sense of teamwork.

These are the skills not only most in demand by employers, Watson said, but also contribute to making well-rounded individuals.

“And our successful students tell us they learned these traits not so much in the classroom but  through their participation in extracurricular activities.”

“We need kids who are civic-minded and know how to give back to their communities,” he said. Those who flip pancakes for a school fundraiser will continue to do so for their communities later in life.

That giving attitude is what makes for a healthier individual.

AFTER THIS summer’s tour of school districts, state educators will use the information gleaned to tailor their ongoing Kansans Can Schools Redesign Project that is phasing in new teaching methods and curriculums to specific districts. The “missions” are named after NASA space programs. To date, 71 of the state’s 286 school districts have participated in the redesign projects. In Southeast Kansas, the school districts include those in Coffeyville, Fredonia, Neodesha, Columbus, Frontenac and Uniontown.

The goal is to have all districts started in the redesign process by 2026.